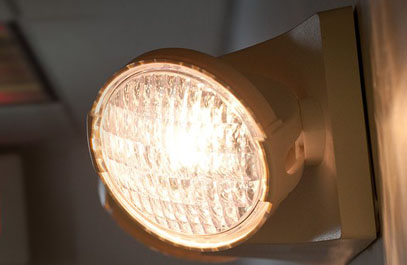 Emergency lighting turns on when the working power system is damaged and is designed to ensure the evacuation of people in the event of a power outage, which can occur in the event of a fire or any man-made accident.

Emergency lighting is lighting that is switched on when the power supply system of the work lighting is damaged and is designed to ensure the evacuation of people in the event of a power outage, which can occur during a fire or any man-made accident. Emergency lighting provides the minimum necessary lighting conditions to continue working indoors and outdoors in cases where the lack of artificial lighting can cause serious consequences for people, production processes, disrupt the normal functioning of the life centers of the enterprise and service centers for mass consumers. It is also necessary at those facilities that cannot be left without electricity for a long time (hazardous industries, hospitals, airports, children's and social institutions).

Emergency lighting is subdivided into evacuation and backup.

Evacuation lighting is subdivided into:

Evacuation lighting is emergency lighting that provides the necessary conditions for the evacuation of people or the completion of urgent work (installed at exits and fire safety equipment).

Back-up lighting is emergency lighting that allows normal operation to continue or can be safely terminated.

Illumination of hazardous industrial areas is an emergency lighting that provides safety conditions during the performance of potentially hazardous work and the continuation of the normal technological process.

Emergency luminaires and evacuation luminaires are two different things. The latter are needed to designate emergency exits, etc., and their presence is strictly controlled by the fire authorities. In the case of emergency lighting systems, the issue is much more complex. According to regulatory documents, they must be in any public or industrial premises, including shopping malls or business centers. However, in practice, this requirement is not met everywhere. Interestingly, even in the rating criteria developed for business centers, the presence of emergency lighting is generally not taken into account as something significant, unlike, for example, an air conditioning system.

Unfortunately, often “exit indicator” luminaires are installed on objects, but they are not emergency. They work only from the mains, when the power supply is turned off, they do not perform their functions and, in fact, are installed only for "show".

In order for emergency lighting to comply with all standards, the following points should be highlighted first:

• Premises of special risk (in which works of increased danger are performed, or public premises);

• Toilets with a total area of ​​more than 8 sq. m, as well as smaller in the absence of light from the outside;

Where and in What Cases Emergency Lighting is Needed?

• At each door designed to exit in case of an emergency;
• Directly on the stairs, so that each staircase is illuminated;
• At obligatory emergency exits and safety signs;
• At each change of direction of movement;
• At each corridor crossing. Outside and adjacent to every final exit from the building;
• Directly at each fire-fighting equipment and fire alarm activation buttons;
• Where lighting of escape routes is required (tunnels, corridors, etc.);
• In stairwells of residential buildings with a height of 6 floors and more;
• In the premises of public and auxiliary buildings of industrial enterprises, if the premises can accommodate more than 100 people at the same time.

It is necessary where stopping a technological or other process is impossible or extremely undesirable, for example, during a complex surgical operation, in central control rooms and control panels for power systems, transport, rescue services, etc. According to regulatory documents, they should also be in any public or industrial premises, including shopping malls or business centers.

• It is necessary where there is a risk of death or injury to a person due to switching off the working lights, for example, in large warehouses where people work and at the same time forklifts are used. Any space using emergency lighting should have at least two emergency luminaires in case one fails.

A non-permanent emergency luminaire is a luminaire in which the emergency lighting lamps operate only when the power supply system of the working lighting is interrupted.

Combined emergency luminaire - a luminaire with two or more lamps, in which at least one lamp operates from the emergency lighting power supply network, and the others from the working lighting network. The luminaire can be of permanent or non-permanent action.

The main standardized parameters of emergency luminaires are operating time and luminous flux in emergency mode.

Prev: How to Choose a Robot Vacuum Cleaner: We Help You Determine the Criteria