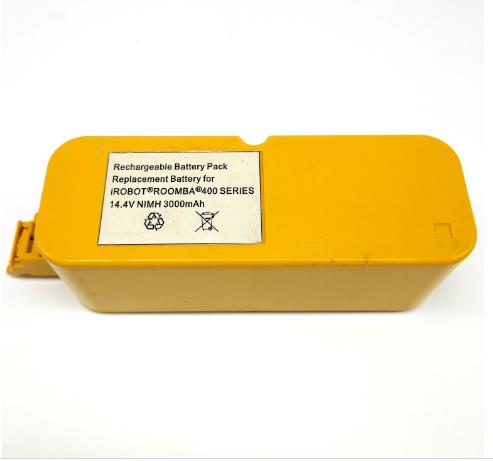 Its electrochemistry relies heavily on redox reactions. The anode's lithium atom is ionized and disconnected from its electrons during a release rotation. The lithium passes through the electrolyte from the positive to the negative charge, rejoining their electrons and becoming electrically neutral. For the reason that lithium ions are so minor, they can permit over a small-permeable barrier that separates the positive from the negative charge.

The battery component is listed below:

The following are the elements of the Roomba battery that have the most significant influence on a customer's choice to purchase our product.

Because of their small size, these batteries can hold a large amount of charge and have a very high voltage mass and volume.

These are simple to swap out. To access the battery, a few screws must be removed, followed by the base plate or battery cover removal.

Up to ten times the cycle life of lead-acid equivalent. Unlike some other battery technologies, these batteries can be recharged without having to be fully discharged first. Compared to different battery kinds, they have a substantially longer lifespan.

It is far lighter than other types of rechargeable batteries of comparable size and output capacities. Because the electrodes are constructed of lite-weight materials, this is the case. They take up less room and are thus more suitable when space is limited.

The entire discharge is at full power significant factor.

Operation is 2.5 times more effective at low temperatures. Operating without risk up to 149°F (65°C). Avoid exposing it to moisture or extreme heat.

Extremely effective charging can be charged fully in 1-3 hours. Internal overcharge defense. Compared to other rechargeable batteries, it charges significantly faster. Up to 100 percent of it can be trusted.

No deterioration from operation or storage in a partial state of charge.

Considerably longer lifespan than typical batteries. In comparison to its lead-acid equivalents, it will endure ten times longer! In addition, other battery cycles are lowered at deeper discharge levels. Reduced impact of deep discharge. Low self-discharge helps the battery keep its charge level.

Their most excellent appeal is that they do not need ongoing upkeep. They belong to the category of sealed maintenance-free batteries. Plug in, operate, and charge. There is no watering.

It is more resilient to extreme power situations than other battery systems. They are capable of supplying electricity to compelling gadgets.

No gases were released during charging and discharging.

The price will vary based on the model and whether you're buying a Roomba battery. Although new batteries are not expensive, the costs will mount if you need to change them frequently.

Procedures for ensuring the longevity of Roomba Battery:

The Roomba battery will last a long time by taking the following actions, which are very necessary:

It suggests doing so regularly to lengthen its useful life.

Keep the robot plugged into the charging dock at all times. These batteries contain a built-in technology that guards against overcharging and reduces charging speed to a trickle if the battery is full.

In addition to increasing wear, dirty parts make the robot work harder, using up more power. Make sure to set aside time on a regular basis to clean the robot's various functions.

Don't leave the robot running on a low or empty battery. By doing this, the battery will deteriorate faster. After each run, recharge the robot and keep it fully charged.

Remove the robot's battery if you're going on vacation and won't be using it for several months. The robot could also be turned off, but I'd take the battery out to ensure it does not completely discharge. For prolonged storage, it advises removing the batteries from the robot.

For the Roomba battery to operate at its best, recharge it every six months.

During the initial phase, you must fully charge and drain the device two to three times. The process will change depending on the circumstance. The trick is to read the handbook entirely before using it.

It is lightweight and ships quickly. It has over 500 cycles Cycle and a one-year warranty, making the battery more reliable and affordable, so now is the time to buy this product.

The ease and other advantages of batteries are the reasons why they are so well-liked. This product is one of the most crucial components of an automated vacuum. JIEYO boasts www.jieyobattery.com's state-of-the-art production and processing technology and a reliable supply network. On all items that were in stock, cutting-edge testing tools and quality control teams were utilized. These Roomba Battery for robotic vacuum cleaners underwent extensive aging and quality inspection. You've always wished for a reliable product. The item you pick is one that is worthwhile to buy. We firmly adhere to our words and deeds, governed by our values and principles.

Prev:  Importance of energy storage battery in our lives

Next: Complete information about IRobot battery